Learn How to Pray Salaah Step by Step

Learn How to Pray Salaah Step by Step
0

The five prayers are among the best acts of worship that the Muslim performs. Performing them is the best deed after having the correct belief in God and His Messenger. Prophet Muhammad (Pbuh), was asked what the best deed was and he said it was performing the obligatory prayers at the beginning of their times.

Each of the 5 prayers have different number of units (Raka'at) daily.

Fajr (Dawn Prayer) is 2 units (Raka'at):This prayer starts off the day with the remembrance of God; it is performed before sunrise.

Dhor (Noon prayer) is 4 units (Raka'at):After the day's work has begun, one breaks shortly after noon to again remember God and seek His guidance.

Asr (Afternoon prayer) is 4 units (Raka'at):In the late afternoon, people take a few minutes to remember God and the greater meaning of their lives.

Maghrib (Sunset prayer) is 3 units (Raka'at):Just after the sun goes down, Muslims remember God again as the day begins to come to a close.

Besides the five daily prayers, other notable forms of salah include:

Shares
1 Takbeer al-Tahreemah (The Takbeer of Prohibition) is a Fard action.

How to Pray Salaah ( Different Position )

Men - Raise both hands to the level of the ears so that the thumbs touch the ear lobes and then saying the Takbeer - “Allahu Akbar” fasten the hands just below the navel, the right hand over the left hand.

Women - Raise both hands so that they reach the level of the shoulders and then saying the Takbeer - “Allahu Akbar” place the right hand over the left on the chest as shown in the illustration. 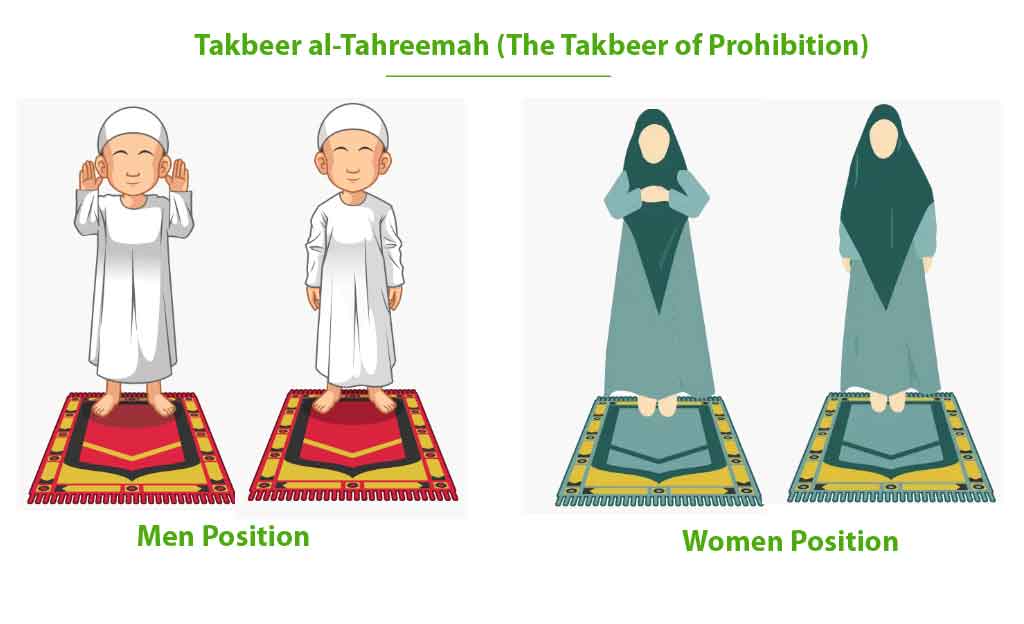